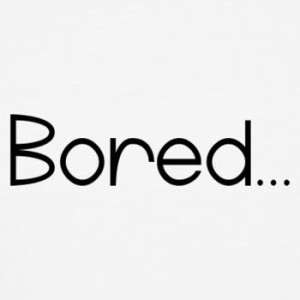 Boredom. It’s something we’ve all complained about since we were in kindergarten. And as I sat in the hairdresser waiting for my hair to develop, I kicked myself for not bringing a book or something else to pass the time.

The first go-to was the boredom busting smart phone so I could fill my time endlessly scrolling through the socials. But what was the point of that? It was still boring. I was only doing it to feel like I was doing something. But what is wrong with doing nothing? And why do I feel like I need to do something?

It feels like a massive feat to unplug from the constant flow of updates, scrolling and notifications. It is a lost art. As I sat in the chair at the hairdresser, I realised that something that was so commonplace in my childhood (back in the dark ages, before the internet) seemed so hard. I itched to pick up my phone. So I made myself sit there and this is what I discovered:

Next time you find yourself feeling bored, just try and be bored. Try and tolerate a feeling that makes you feel annoyed or frustrated and see what happens.

About the Author: Fiona Lambden